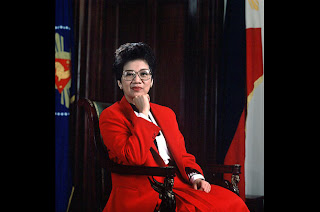 Champion of Democracy
TIME chose Corazon Aquino as its Person of the Year for 1986, recognizing her central role in one of the most compelling dramas in recent history — the widowed housewife who avenges her husband's death by overthrowing the regime widely blamed for his murder. In February 1986, Aquino rose to the presidency of the Philippines after a popular uprising that forced Ferdinand and Imelda Marcos from power. She was the first woman to be designated TIME's Person of the Year since Queen Elizabeth II for 1952. A Life of Privilege
She was born Corazon Cojuangco, an heiress to one of the great fortunes in the Philippines. In 1954, she married Benigno Aquino, one of the most ambitious and promising politicians in the country. Before they met, however, Benigno had dated a young beauty queen named Imelda Romualdez. Years later, his political career would turn him into the political nemesis of the man Imelda married, Ferdinand Marcos, who was elected president in 1965. 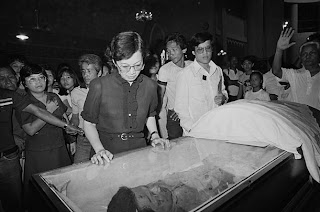 The Martyr's Wife
With Benigno Aquino's political star rising, Marcos assumed dictatorial powers in 1972 and imprisoned his archrival. Under international pressure, Aquino was eventually allowed to leave the country with his wife and children for exile in Boston. In 1983, however, he chose to return to the Philippines to try to offer himself as a political alternative to an ailing Marcos. The regime warned it could not guarantee his safety; but Aquino flew back anyway and was assassinated allegedly by a lone gunman while being escorted off his plane by Philippine soldiers. Corazon Aquino flew home for his funeral. 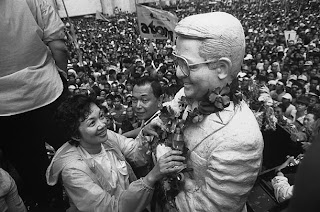 In Her Husband's Name, Challenging the Tyrant
Without Benigno Aquino, contending ambitions prevented the opposition from coalescing around a single candidate, even as the country appeared to be galvanized against the regime. Marcos sensed their disarray and, confident in the support of his friend President Ronald Reagan, declared a snap election to prove he still had a popular mandate. Only then did the soft-spoken, pious Catholic widow to realize, reluctantly, that only she could unite the opposition, that only she could make her husband's dream come true. 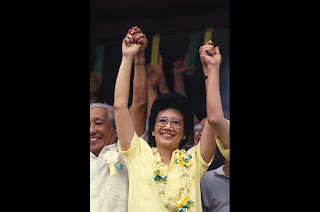 The Yellow Tide
Aquino turned yellow into the color of her campaign. It was, personally, one of her favorite hues; but its political significance stemmed from the yellow ribbons tied around Manila's trees and posts (inspired by an American pop song) by the supporters of her husband to welcome him on what proved to be his tragic return home. Her rallies were seas of yellow. 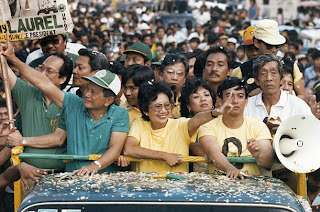 An Election Against All Odds
Aquino proved to be an inspiring campaigner, evoking tears and passion wherever she spoke. Hundreds of thousands turned out for many of her rallies; Marcos responded by bussing in thousands of his own for counter-rallies. The country seemed to be polarized. Almost immediately after the Feb. 7, 1986 polls closed, Aquino stunned Marcos by claiming victory; then the official tabulation trickled to a stop and Marcos was declared the winner by the government. Aquino declared she had been cheated. 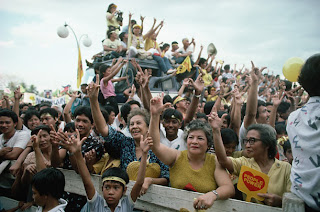 Stand-Off and then a Catholic Rebellion
Two weeks of a tense political stand-off occurred; U.S. President Ronald Reagan, who had long professed friendship with Marcos, sent in an envoy to suggest Aquino share power with the dictator. She refused, feeling it repugnant to be asked to work with a man she believed had ordered her husband's murder. Then, Marcos' Defense minister and the second-in-command of the armed forces led a mutiny against the regime; the Roman Catholic Cardinal of Manila, Jaime Sin, gave up all pretense of neutrality and ordered the faithful in the streets to support the mutineers in the name of Aquino. They came out in the millions. 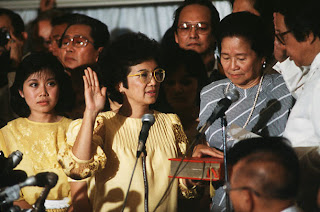 Madame President
On Feb. 25, even as Marcos appeared to be adamant about remaining president, Aquino was sworn in by a justice of the Supreme Court as the first woman to lead the Philippines. In Washington, meanwhile, seeing the populace turn against his friend, Reagan called Marcos and convinced him to leave the Philippines for exile in Hawaii. The man who had ruled the Philippines for two decades said farewell to his loyalists as his wife Imelda sang a final song. Then they took off for American territory on U.S. Helicopters. 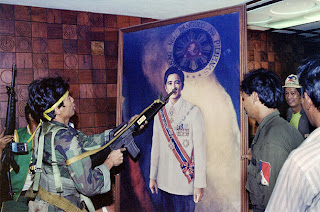 Taking the Palace
Shortly after the Marcoses departed, the successful mutineers and Aquino supporters took the presidential palace, photographing themselves at Marcos' desk, poking guns at his portraits and, most startlingly, finding Imelda Marcos' enormous collection of shoes. The tacky but expensive furnishings of the First Couple disgusted Filipinos; as were allegations of billions of dollars that they had deposited in foreign countries. 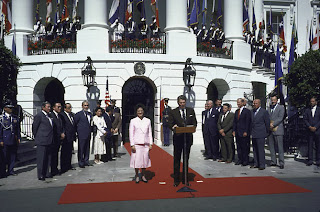 A Washington Welcome
Apart from winning the presidency, one of Aquino's sweeter triumphs was her reception in Washington in Sept. 1986, where she was greeted at the White House by Ronald Reagan, the friend of her old nemesis. Her speech to a joint session of the U.S. Congress was widely praised and interrupted numerous times by applause. 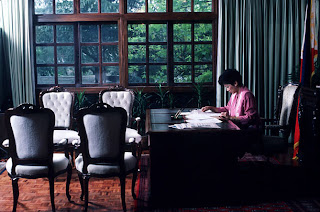 The Difficult Years After
Her ascendancy to the Presidency was perhaps the most important event in Aquino's life. But it would not be the only drama she would face. She would face down several attempted military coups. She delivered on her promise of closing down U.S. Military bases in the country. But the Philippine economy would sputter on, set back by several factors, including the catastrophic eruption of Mount Pinatubo in 1991. Yet, Aquino had just enough popular goodwill to preserve the democracy that her husband gave up his life for. After her single six-year term allowed her by the constitution, the people elected the candidate she endorsed for the presidency. Aquino died after a long battle with cancer. She was 76.